The Journey of Alexander the Great

This is a battle report from Britcon 2011, I wrote it in english for some reason :),
if you find some errors please report to me.

I arrived with Martin Wirt at thursday in Manchester and had some warm up gaming with him and Salvador a spanish player.

The First Match at BritCon is to army route. I managed it well at the beginning,
won initiative and avoided his protected Light Foot . So my Light Foot could pull
his legionaries at the right side. I won this side with some luck, killed two big legionaries and his elephants and so made 10:0 atrittion points, Dave complained about my roman dices, he couldn't read them!. My Agema then crushed in some lonley 4 bases legionaries and LOST!.
Then the luck turned against me and i won no combat anymore. I lost 10:13 points! FoG is a game of dice. 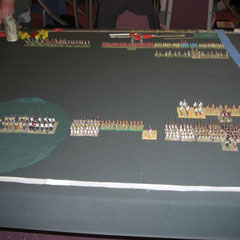 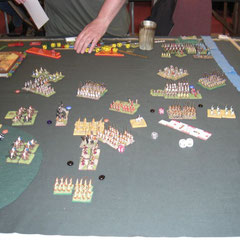 It seemed that Alexander had some family issues with Dimitrios his nephew to sort out.
David won initiative and protected his baggage only with lights, because i must split my forces and David had them on the left i wheeled my 3 pike units asap in the middle and slowed him with my skirmishers. His aim was my Iphikratean, which he finaly got. He stayed with a disprupted Bactrian Light Horse the charge of my Thracain and Prodromi and WON! Our lines didn't meet.
I lost 0:5 attrition points. FoG is a game of dice.

Phil was the winner of this period at last britcon, he placed 17 BG Cavalary Lancers Swordsmen on the table!. So I played a shield of pike and do not get him a gap where he can charge. To protect the left I set my Cavalry on. My skirmishers I played defensive. This worked out and Phil charged into my pikes and was beaten by my companions. I won 7:2 attrition points.

Easy I thought, as I managed these army with my Nikos at the last Komicon and I have an IC!. I tried to get his archers on the right side with my Iphikratean but they shoot me to death. All the Foot on his Side is armoured and I run against the Greeks, because his AppleBeares shot me everytime to disrupted. Carl diced good and finaly I lost 0:12 attrition points, pooh no army route. I diced badly. FoG is a game of dice!

I won initiative and meet again the romans. The Romans hide behind Field Fortifications but didn't used them, they were hopping out. David don't managed his cavalry well and both faught with my pikes. I won 7:2 attrition points. 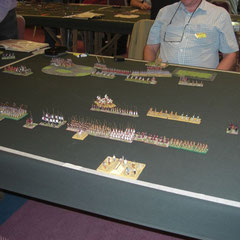 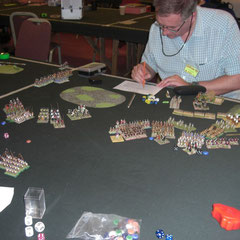 This was the thing with the disguised elephant!
OK, I thought some Cataphracts and some Romans, but it turned out that my opponent had 8 units of cataphracts and some lights! With three he was on a flank march.
I won initiative and because I had a plantage on my side I placed the Iphikratean there as an ambush, because they can't be used against Cats in the open.  All his forces where on the left wing and I wondered why and placed my pike shield moving not much.
Later he told me that he feared the elephants in the ambush! This left me room to manoveaur my lights on the right side and get his two light troops. I now know to use light troops well! Robert was a very accurate player and this cost me my Greek Hoplites in the center... FoG is a game of Skill!. I won 3:2 attrition points. 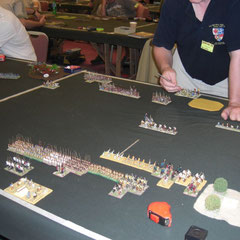 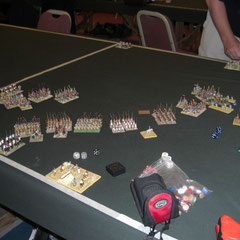 In Britcon you meet high-skilled players and you learn a lot! Maybe a more offensive army with cavalry would score more. Because I won not high and had one high loss I was only the 30th of 37 players in the Conquering Empires period.